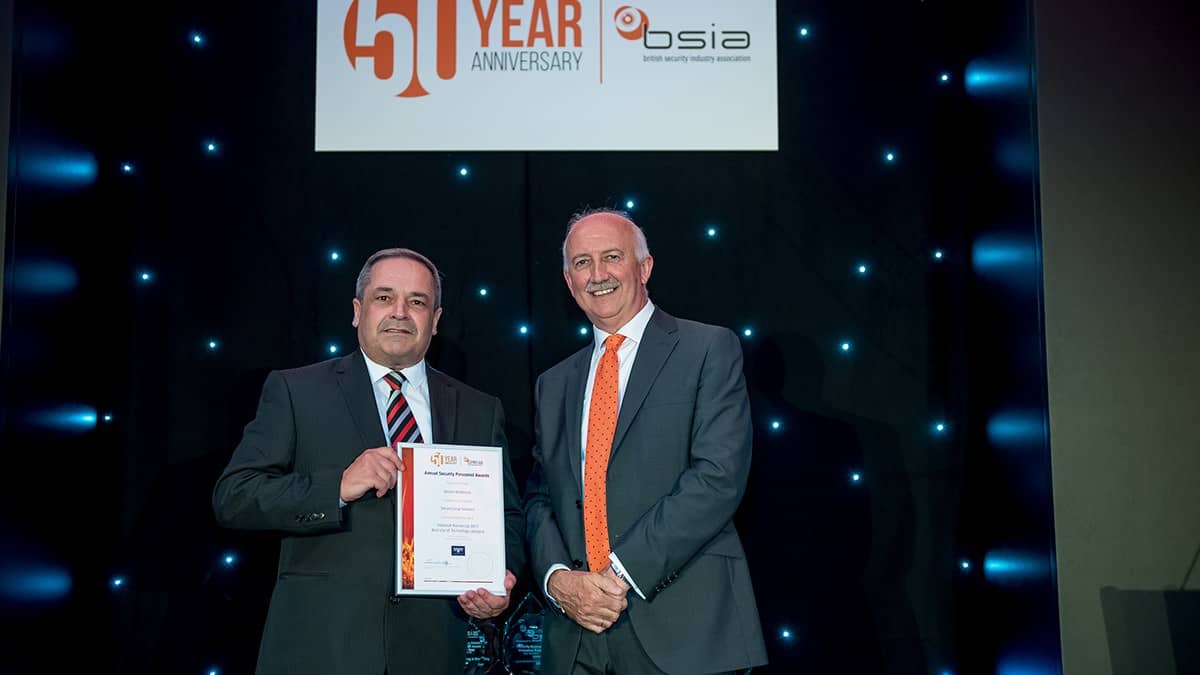 All award winners attended the BSIA annual luncheon in London where they were presented with the awards.

We are very proud of their accolades and the achievements they have made in not only SecuriGroup but also the security industry.

Steven McKenzie has been working on one of the largest infrastructure projects ever undertaken in Scotland with FCBC in Rosyth for the last 5 years.The bridge is being made of over 150,000 tonnes of concrete, 35,000 tonnes of steel, 23,000 miles of cabling and reaches 207 metres above high tide.

As a result of his enthusiasm towards his role and the project, Steven developed a true understanding of how each piece of technology ensures the constant safety and efficiency of the project.

His strong work ethic and 'can-do' attitude translate to a real willingness to learn. One of his most positive attributes is his commitment to the safety of all despite the enormity of the project. This award, from a trusted industry association, highlights the complexity of Steven's role in utilising a complex technological system and the value of the positive outcomes he has achieved.

As she progressed in her role her confidence increased and she steadily proved herself to be a valuable member of the team.

Passing her Door Supervision training with flying colours, Erin is now a key member of the SWG3 team, using her impressive customer service skills, professionalism and sensitivity as a positive ambassador for SGL.

Having vastly improved her skillset during her time with the Company, developing a better understanding and confidence in her role, Erin's success story demonstrates a key aim of our entire Company - to recognise talent and provide it with the opportunity to flourish and thrive.

Charlie was nominated for this award due to his incredible and life-saving actions during the course of his job at a council building in Inverness..

On this particular occasion, an individual suffering from a serious psychological disorder, armed themselves with a weapon after becoming severely agitated. In doing so an immediate risk was posed to themselves and other service providers.

Charlie approached the situation despite the clear and present threat on his own wellbeing, and used his communication skills, sensitivity and compassion to resolve the issue. A life was saved due to his intervention and the first-aid skills he provided.

Charlie's heroic actions make him a role-model for other security personnel and highlight the critical role played in such high pressure environments in which they often operate.

We are all grateful to Charlie for his dedication to the role, and the BSIA for recognising his achievements.

These new achievements follow on from the BSIA Regional Security Personnel Awards, where all three personnel won awards in December last year.

For all media enquiries, please contact the SecuriGroup Communications team at communications@securigroup.co.uk

SecuriGroup is rated within the top 1% of approved UK security companies by our Home Office regulator, the Security Industry Authority.

Strengthening the society in which we live, and an Investors in People Gold organisation, SecuriGroup provides innovative and expert solutions to our clients’ security needs. A two-time winner of ACS Champion of the Year, our security management approach shapes the future of the industry by combining physical, electronic, and cyber security to augment our service delivery.

We're on Social Networks. Follow us & get in touch!

Stay up to date with our latest company news